This is a follow-up to last week’s post about the CSS default box model. It’s a more in-depth technical discussion of the problem, and it describes the awesome alternative: box-sizing: border-box.

What the CSS Box Model Is 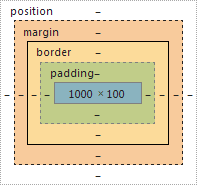 The CSS box model is the set of rules that decides how a CSS element’s sizes are computed as you add padding, borders, and margins around the content.

That turns out to cause a lot of unnecessary headaches. Last week, we wrote a parable showing why. As you read the parable, keep the following CSS rules in mind:

Why the Default Box Model is a Problem

The CSS default box model takes element dimensions that you’ve gone to the trouble of formally declaring (“this box should be 100px wide and 100px tall”), and dumps padding and borders on top of them. The result is that tightly spaced elements are constantly prone to overlapping onto each other and breaking entire layout flows.

It’s usually at odds with the designer’s intention

Probably the simplest argument against the default box model is that it approaches layout differently than actual designers do.

An obvious question is, “Isn’t working with the default model just a matter of learning a different way of saying the same thing?” If you’ve really got your heart set on a 100-pixel box, can’t you just do a bit of math and call it 50 pixels with 20px padding and 5px borders?

That we’d have to do this in the first place points to probably the simplest argument against the default box model: it approaches layout differently than actual designers do. When I try to lay out a page, I never think, “No matter what happens to the rest of the layout, I need this paragraph of text to take up exactly half of the page width.” I always think: “This column that contains text—and which has padding and borders and whatnot—should fill half the page.”

So the default model puts us through a lot of unnecessary translation work. Do we really want to manually be doing a bunch of math—”element width = declared width – (left padding + right padding) – (left border + right border)”—just to make CSS understand what we should have been able to declare with a simple, emphatic “width”?

With the default box model, there’s no way to make this work. To get a 50% total width, you’d have to subtract 15px from 50% of the container width; but you don’t know the container width to be able to convert 15px into a percentage. As a result, whatever width value you attempt will always be broken: the columns will break and stack vertically at some widths, and they won’t fill the container at others.

The sensible CSS above will break, since what needed to be a 250px-wide image is now 252px.

It turns out that CSS has partially redeemed itself with a wonderful solution to this problem. It’s called box-sizing: border-box, and it works perfectly and enjoys essentially total browser support. 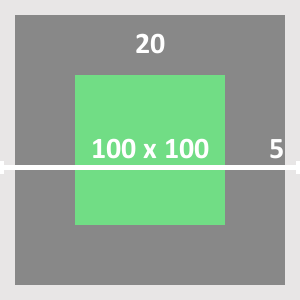 box-sizing: border-box includes padding and borders in an element’s width. So the .new-home CSS at the top of this post will now generate a square element with 20px of padding, 5px borders, and which all together is 100px by 100px.

How to use it

The code to change your box model comes from the excellent article “* { Box-sizing: Border-box } FTW” by Paul Irish. It’s as follows:

Just drop this into your CSS (preferably somewhere near the top), and you’ll be covered in every browser that’s in current use—including old IE versions.

Things to watch out for

Here are a couple caveats for laying your site out with box-model: border-box:

1. Margins are still outside the element.

This means that the discussion above about padding and borders still applies for margins. For example, this code will still break:

There’s been some discussion of a hypothetical box-sizing: margin-box; option, which would let you set definitive element widths once and for all. I’d probably use this if it existed, although it apparently never will because of something to do with vertical margin collapse (which, for the record, is something that has caused me a lot of confusion as a designer, as opposed to something I couldn’t bear to see changed).

At any rate, for the foreseeable future you’re stuck with being creative about adding margins to your styling in a way that won’t break it.

Obviously, the space for your borders and padding has to come from somewhere, and with box-model: border-box it’s borrowed from the content itself. So a 100px square image will not actually measure 100px if you give it borders and padding—the whole element will, of which the actual content is just a piece.

This is rarely a problem for me, since with responsive design considerations I typically expect content sizes to be variable anyway. But I do imagine this could cause confusion if, for example, you had two absolutely sized 400px boxes inside an 800px box, and they no longer fit with the addition of borders and padding.

3. Be alert if you’re transitioning an entire site to a new box model.

If you’re going to use a new box model at all, you’ll want to change it across the entire site; this is what the code snippet above does. If you’re thinking about changing an existing site’s box model, be aware that the layout of everything across the site will be changed in ways that may be hard to predict beforehand. Try to do it on a staging site and click around to see the results; don’t just drop it in and forget all about it.

Fundamentally, box-sizing: border-box makes a lot more sense for how I actually work and think as a designer. I think most people who have tried it feel the same way—the issue is that not enough people know about it. So don’t be afraid to spread the good news!

We’d love to hear your questions thoughts in the comments below—and, as always, if there’s anything we can help with, please be in touch.

9 thoughts on “What’s Wrong with the CSS Box Model, and How to Fix It”