Somewhat jokingly, when I shared last week’s post about using Markdown to our Facebook page I threw in a line about how Markdown should destroy Microsoft Word. While I don’t really hate Word, or any other tool in Microsoft’s Office suite, I think they’re almost never the best tool for a given job.

And it occurred to me that I’ve also decided to eschew Microsoft PowerPoint, or the hipper alternative of Apple’s Keynote, for another common open alternative. It’s an alternative that also, not coincidentally, lets me compose my slides in Markdown.

I spoke at WordCamp Boston in late October about WordPress “theme creep” (relevant posts describing the problem, and offering some solutions) and I’m speaking this coming weekend at WordCamp Denver about how one goes about programming inside of WordPress themes. The “deck” for my Boston talk is online, and the Denver talk will be posted soon.

Slide Presentations without PowerPoint… Or Keynote 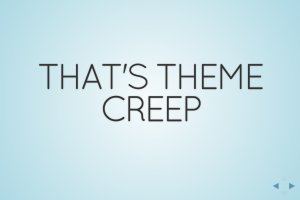 I prepared both with an awesome open-source Javascript library called Reveal. Reveal.js offers fewer transitions and stock fancy effects than either PowerPoint or Keynote. And if you’re not comfortable with HTML you may be a little confused about how to even make a presentation in it. But those limitations are awesome to my eyes.

Your ability to code and insert content and cool effects into Reveal.js slides is effectively limited only your ability to make HTML and Javascript bend to your will. Which, I won’t lie, is a lot farther outside of the comfort zone of most people than clicking the transition button in your fancy presentation software. And that’s why most people don’t use this kind of tool.

But fancy transitions are effects aren’t really my style anyway, and the ease and speed with which I can type out my Markdown slides vastly dwarfs my efficiency with PowerPoint and Keynote which require that you position seemingly everything manually or settle for a pretty drab experience.

Reveal’s default theme’s won’t set the world on fire, but they look consistently and effortlessly pretty good with nothing but a basic HTML structure defined.

It’s not for everyone — if HTML scares you, you probably should steer clear — but if you have any interest in breaking free from the tyranny of Microsoft Office or Apple’s iWork suite, I can recommend it heartily.

PS: I’ve not used it, but I feel like I’d be remiss if I didn’t mention that there is “freemium” version of Reveal, called Slides, which you can use in a manor a bit more like PowerPoint or Keynote. Again, I’ve never used it, but if the caveats scared you but the idea intrigued you I’d say it’s worth a look.